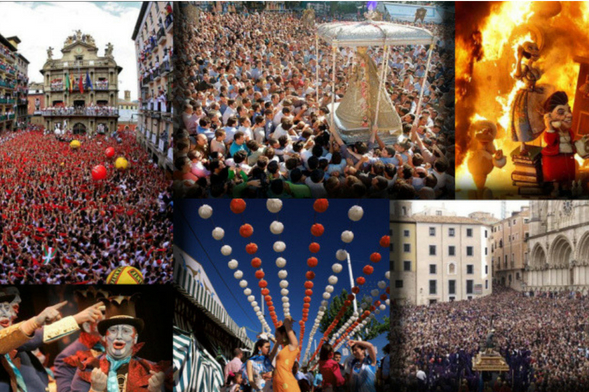 Posted at 13:10h in Meetings & Events by Premium Incoming 0 Comments

We briefly review some of the most traditional festivals held in Spain.

The Sanfermines, festivities in honor of San Fermin, start on the 6th of July at 12am with the “chupinazo”, which involves a rocket launched from the Pamplona Town Hall balcony. 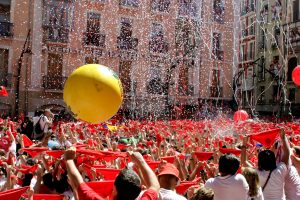 The highlight of the festivities are the “encierros”, a fast and tense race of 846 metres where the runners guide the bulls from the corrals to the square, running ahead or between them. The running of the bulls takes place at 8 a.m. from July 7th to July 14th.

The festivities end on July 14th with the popular song “Pobre de mi”, an act in which both Pamploneses and visitors sadly say good bye to the fiestas singing this song and with a fireworks display.

Location: Valencia and other cities of Valencian Comunity
Dates: From 15 to 19 March

The origin of this celebration is a former tradition of carpenters which consists on burn all their tools and useless materials on the eve of the festival of San José.

The ninots, symbols of Las Fallas, are constructions of wood and cardboard that decorate the city and which representing hot topics. On the final day, the night of “La cremá”(Saint Joseph’s Day), all faults are burned, except one of the fallas, that is pardoned and becomes part of the Fallas Museum. 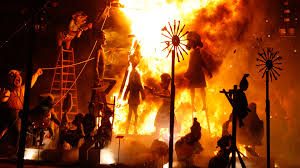 One of the most iconic moments of Las Fallas is the mascletá which consisting of a daily explosive barrage of coordinated firecracker and fireworks displays that lasts until the end of the festivities. Each in less than five minutes and can reach up to 120 decibels.

Las Fallas are listed as celebration of International Tourist Interest.

La Tomatina is a typical party that is held in the Valencian town of Buñol and that consists in a battle in which participants throw tomatoes at each other purely for fun. 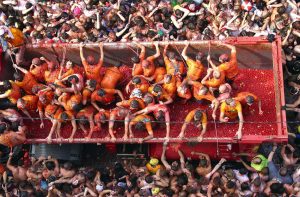 The festivities begin with the “palo jabón”, which involves climbing a greased pole with a ham on top. At 11am the starting signal is given and is when the trucks start throwing tomatoes to the participants. 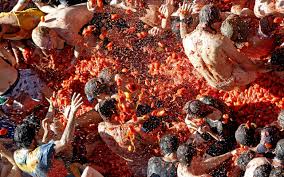 The tomatoes have to be squashed before throwing to avoid injuries to people and the use of protective goggles are always recommended. The battle ends one hour after with the firing of the second shot, announcing the end.

The festivities of San Isidro are some of the most typical of the Spanish capital parties. Held in mid-May and made in honor of San Isidro Labrador, is characterized by numerous folk festivals and traditional and cultural events that take place throughout the week. 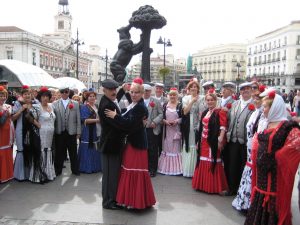 The most characteristic image of San Isidro is to see people dressed of “chulapos” dancing a “chotis”, the typical Madrid dance.