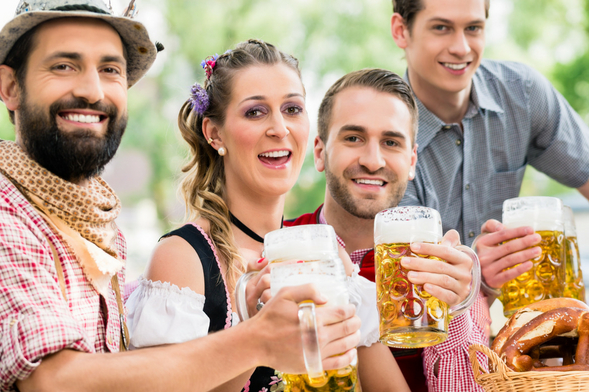 Posted at 15:27h in Themed Tours by Premium Incoming 0 Comments

The world’s largest folk beer festival is approaching. We bring you the latest information, so you don´t miss anything during your visit to Munich. Organize your trip to Germany!

The Munich Oktoberfest (beer festival) is all set to run from from September 22nd until October 7th, 2018. The Wiens“- the world’s largest fair – attracts some 6.4 million visitors a year. It all started with a horse race which the national guard staged for the people on 17th August 1810 to mark the wedding of the Ludwig Crown Prince of Bavaria (later King Ludwig I) to Princess Therese von Sachsen-Hildburghausen. The race was such a success that it was staged again. The number of stalls began to increase and in 1896 the very first beer tents were erected which sold only beer brewed in Munich, a tradition which has remained to the present day.

Please note: At the weekends the beer tents are often closed as of noontime due to overcrowding!

Monday – Friday (except holidays) from 10 a.m. to 3:00 p.m., (the sign “Mittagswiesn” means discounts for attractions, admissions and prices).

Whether you go into one of the huge beer marquees or one of the smaller tents a party atmosphere is guaranteed and the beer tastes great wherever you are! You will be spoilt for choice! 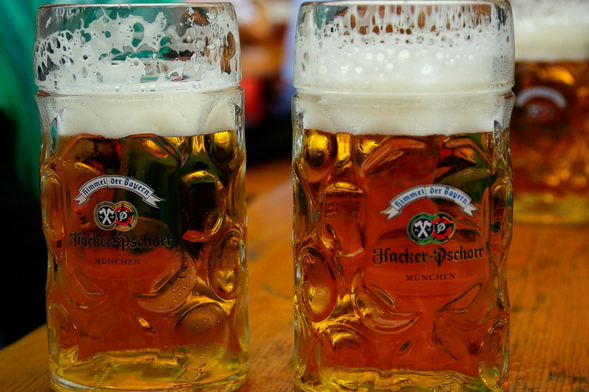 Seven enormous beer tents line the so-called “Wirtsbudenstraße”. The beer is brewed by Munich’s six largest breweries and has an extract value of some 13%.The price of a „Maß“ (a liter of beer) is somewhere around € 10,00. 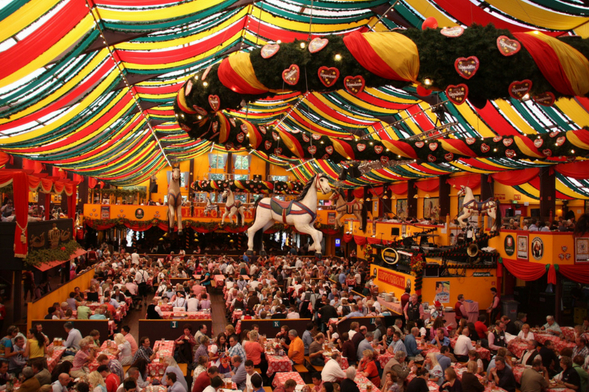 -Augustiner: This is the only tent still serving the beer from large wooden barrels rather than from the steel ones used elsewhere. The tent seats a many as 8,500 people.

-Hackerbräu tent: This is the only tent with a revolving stage in the middle. The tent seats 9,300.

-Hofbräu: tent As this is the tent tourists are most familiar with it is the one with the most international flair. Party till you drop is the order of the day here! You will even get served with a beer if you haven’t got a seat. The tent seats 9,350.

-Löwenbräu tent: This tent is the traditional meeting place for fans and players of 1860 Munich football club. The tent seats 8,500.

These slightly smaller tents are run exclusively by Munich based publicans all of whom are under licence to the larger breweries.

-Armbrustschützen tent (Paulaner): This tent is all about hunting and visitors can sit in the themed boxes (pheasants or badgers) and admire the hunters’ trophies. The tent seats 7,430.

-Fischer-Vroni (Augustiner): This is a small and cosy tent located right next to at the entrance which offers grilled fish as well as sander, whitefish and salmon trout. The tent seats 700.

-Festhalle Schottenhamel (Spatenbräu): This is the oldest tent at the Oktoberfest dating way back to 1867. It is extremely popular with the younger visitors. The tent seats 10,000.

-Hippodrom (Spatenbräu): Last year the Hippodrom had two reasons to celebrate: the 100th anniversary of the tent taking part in the Oktoberfest and the 50th anniversary of serving Spaten beer. The gallery is always full of celebrities from the worlds of film, sport and business. The tent seats 4,200.

-Käfer’s Wies’n-Schänke (Paulaner): Meeting place for the rich and famous. Because of the extended licensing hours to 1 a.m. there is always a real crush to get in here after the other tents close at 11 p.m. The tent seats 2,900.

Traditional food at the Oktoberfest

From Premium Incoming DMC we encourage you to prepare your thematic trip to Oktoberfest in Munich so you do not miss any of these unique festival. Contact us for more information at info@premiumincoming.com