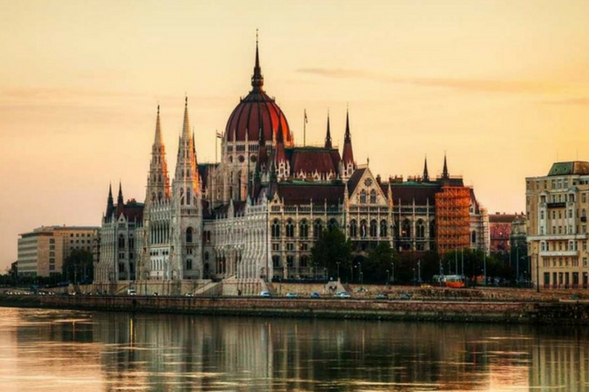 Posted at 08:49h in European Destinations by Premium Incoming 0 Comments

Also known as “The Pearl of the Danube”and divided into two parts by the great Danube, Budapest is a must for travel lovers. The city itself draws the visitor with its beauty and grandeur. Budapest has the largest Parliament in Europe and the oldest subway of the continent.

It is also the only European capital with over than one hundred thermal springs and 12 Public baths. After a full day visiting this city, relaxing in a hot pool will get you back on your feet with renewed energy. Budapest is not only the capital of a nation, but an imperial city full of extraordinary examples of fine architecture and high end museums.

Among many of its places and secrets we recommend you the following:

One of the must see is the Budapest Fishermen’s Bastion. Neo-Romanesque spectacular terraces from which you can see all around Budapest. With 7 white towers which represent the seven Magyar tribes; you can enjoy a unique view of the city, especially at night.

The Basilica of San Esteban´s Tower

The St. Stephen’s Basilica is the largest religious temple of Budapest. With a neoclassical style and with a dome of almost 96 meters, its silhouette dominates the skyline of the city. We recommend you climbing the tower, from which you can enjoy a spectacular view of the entire city. 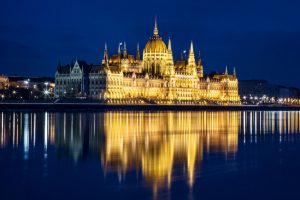 An outdoor museum dedicated to the historical memory of Budapest and its Communist period. In it you can see all the statues of the great communist leaders of the history, as Marx or Lenin, which has to be known as “The statues park”.

This market was built in 1897 and is the largest market of the five that the city has. Destroyed by Second World War and declared in ruins, was in 1994 when it reopened his doors to the public. With an Art Nouveau style is a great way to meet people from Budapest on firsthand. 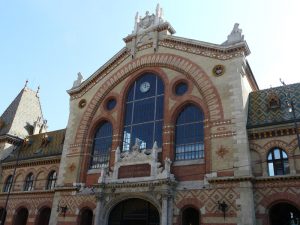 Budapest acquired the title of “The City of Spas” in 1934. It has more than 110 springs, natural and artificial, from which sprout every day more than 70 million liters of thermal water at temperatures between 20 and 80 ° C.

Although the best known are the Gellert Baths, we recommend a visit to the Széchenyi Baths. Considered one of the largest thermal baths in Europe and with a gothic style, it has 15 pools many of them outdoors. 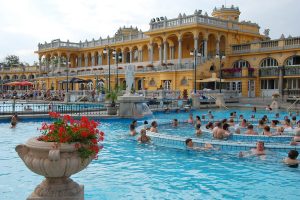 Hungary was one of the European countries that suffered the Second World War. Their synagogue was built between 1854 and 1859 and is the world’s second largest. During the Second World War many Jews were imprisoned in walled ghettos that were behind of the Great Synagogue. Many of these neighborhoods have remained reflection of that terrible time and have become one of the most underground areas of Budapest.

Hospital “In the Rock”

Converted into a museum in 2008, this Hospital is comprised of a series of caverns connected to the Buda Castle which was used during the Second World War as a field hospital. A bunker inside the mountain where you can see how they worked at the time as well as the tools and materials they used.

If you want to enjoy Budapest at night on unique and funny way, the ruins bars are the best option. Local and abandoned houses where young people have mounted eclectic and modern bars, decorated with recycled materials. The vast majority are in the Jewish Ghetto and the Erzsébetváros neighborhood. A unique way to enjoy the hungarian nightlife and its famous Pálinka. 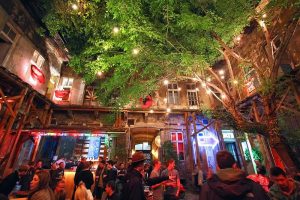 The Pálinka is a traditional fruit brandy that is made in Hungary since the sixteenth century. Along with it, Hungary is a producer of great wines and is well known for sweet wines of Tokaj. In Budapest you can enjoy good tasting elixirs during the festivals celebrated in the Buda Castle, a spectacular setting to discover the wines of the region.